Before I begin this post I want to have the following disclaimer:
This was only my experience. It seems as if plenty of people have made this recipe without incident. I, however, failed miserably.

I've been seeing a recipe for zucchini lasagna floating around Pinterest recently, and I even have it pinned to my food board. I decided the other night to try the recipe so I bought zucchini, beef and crushed tomatoes at the store, and I seemingly had everything else I needed at home. Now, I may not always be the best cook, but I can follow a recipe. So I cut the zucchini, salted them, squeezed out the excess water, and even broiled them a bit. I cooked the beef and drained off the fat.

Then my issues began. I added the tomatoes and their juice to the beef mixture. The recipe said to add no extra liquid - the sauce was supposed to be thick. I realized though, that without liquid, a beef and tomato mixture cannot accurately be defined as a "sauce". My sauce was not a sauce. I figured that the recipe said not to add any liquid so it would be fine. I started layering my lasagna - not saucy sauce, then zucchini, then the ricotta mixture, then the mozzarella... oh wait. My mozzarella block was moldy, and I was not about to go back to the store. I found some string cheese in the fridge - the package says "Mozzarella Sticks". A perfect solution! I tore the cheese sticks apart and continued layering my lasagna. I then covered it and baked it for the 45 suggested minutes.

Only when I removed the foil did I truly know something was wrong. My not saucy sauce had not magically liquefied in the oven, and much to my surprise, mozzarella cheese sticks don't actually melt in the oven. They may be sticks of mozzarella, but I am now questioning the quality of said mozzarella. Instead of melting, the cheese sticks stayed just as they were and only got rubbery. So what do you think, do you think I nailed it? 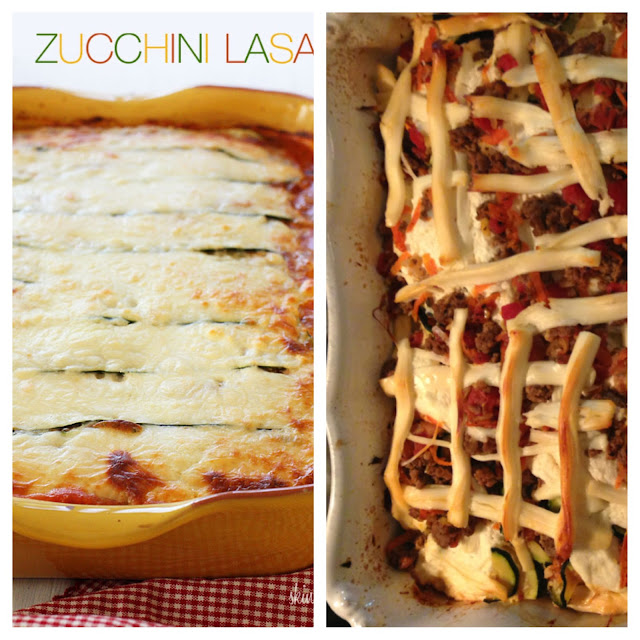 Between the now dried out beef and the cheese rubber, both Lars and I decided it was inedible. Needless to say, after that flop, the hamburgers we went and got for dinner that night were heavenly. :)
Posted by Anna
Email ThisBlogThis!Share to TwitterShare to FacebookShare to Pinterest
Labels: Pinterest Fails

Anna
I'm just a girl from Austin who loves fashion, food, home design, and almost anything with fringe! Feel free to come along with me as I write about things I love and daily inspirations I find.